As many will know, Jess is part of a very successful real estate agency with his cousin and former Hawk, Dan Bolton at Fletchers Mooroolbark. The increasing demands of his work have seen Jess miss a few games already this season. In typically selfless fashion, Jess said that he didn’t want to be taking a spot from one of our young players who are well and truly ready for senior football.

Senior Coach Matt Clark paid tribute to Jess as an outstanding person, footballer and contributor to the Club over many years, highlighting that opposition coaches would always need to plan for Bolts as a key player for the Hawks.

Jess is a true champion of the Club and two-time Bob Henry Medallist.

He was originally a Boronia Junior but left for East Burwood to play 74 games between 2005 and 2007 including 20 games in Division 1 Seniors. Bolts came back to Boronia in 2009 to make his senior debut for the Hawka. He also played 19 VFL games for Casey Scorpions / Demons between 2009 and 2012 before committing 100% to Boronia in 2013.

Jess is one of our most decorated players of any era in the Club’s history. His record includes:

Please join us all is congratulating Jess on his fantastic career with Boronia Hawks Football Netball Club.

Congratulations to our four nominees from Boronia Hawks for the EFL Netball Premier Division 2017 Team of the Year.  Nikki Phillips, Melissa Martinov, Petra Keogh and Bec Allen have all been recognised for their outstanding performances in a premiership season by being named in the initial squad of fifteen.

Boronia, Fairpark and Wantirna South each have four players named in the initial squad, along with Blackburn (one) and Montrose (two).

The final team of 10 will be announced on Wednesday, September 20 at the Eastern Football League’s Chandler Medal.

Boronia Hawks Netball is always grateful for the generous support of BusyBodies Health and Fitness. 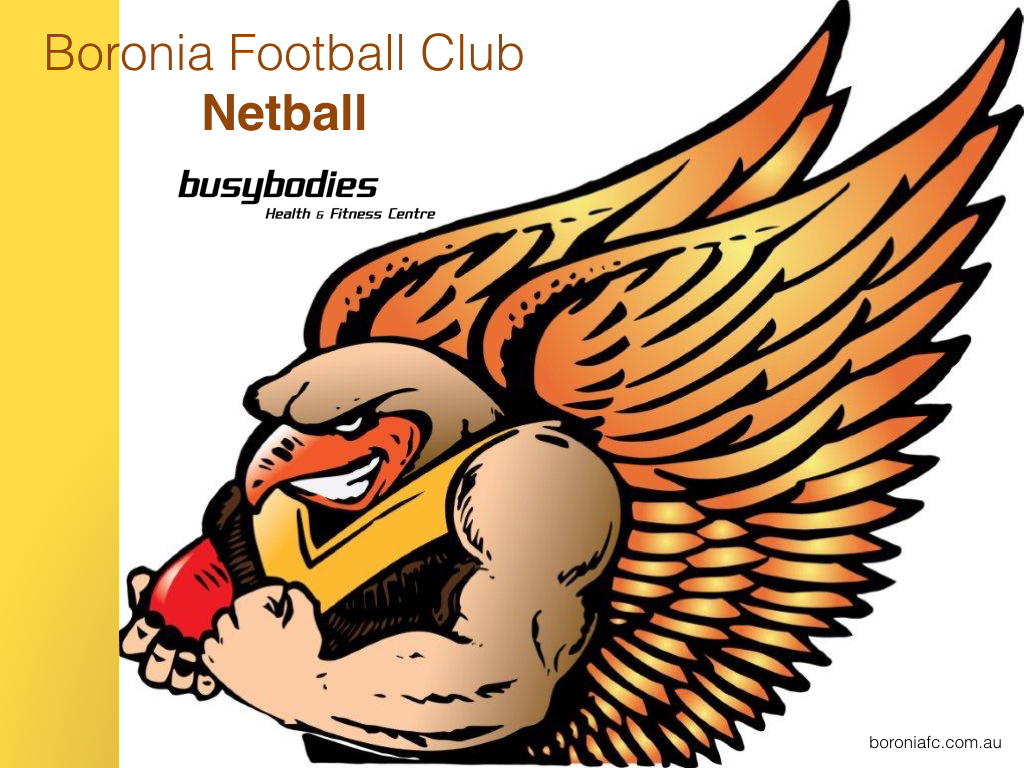 Congratulations to Ryan Henderson who will play his 100th game for @boroniahawks in Round 6 at Tormore Reserve.  The big hearted follower came to Boronia from Vermont in 2012 and has been a rock solid contributor ever since.  Ryan has taken on the biggest (and ugliest) blokes the opposition can throw at him in the ruck, and loves to slip forward for a big mark and goal.  Well done Hendo, we love your work!

Boronia Football Club would like to express our appreciation to Mr John McLeod for leading our ANZAC remembrance ceremony at Tormore Reserve on Sunday.

The Boronia Football Club training sessions held prior to the Xmas break were extremely successful.

Senior Coach, Peter Brown, was very happy with the number of players who attended training and with the overall attitude from the boys.  Pete was also very pleased with the way the new recruits settled in with their new team mates and familiarised themselves with our training methods.

Training for 2017 resumes on Monday 30 January.