Boronia Hawks Development Squad for the GRAND FINAL v Mitcham at 11:55am on SUNDAY at East Burwood – presented by Knox Club GO HAWKA!!!

Congratulations to Rhiannon Crompton and Kellie Newton from Boronia Hawks who have been named in the initial squad for the EFL’s Premier Division Netball Team of the Year!

Grand finalists Wantirna South and East Burwood lead the way with four nominees named each. The final team will be announced at the Chandler Medal on Wednesday, September 18.

See the full squad by clicking on this link.

Tormore Reserve is a leading community facility and the addition of new sporting lights through the great support of Alan Tudge MP, AFL Victoria and Knox Council will ensure that reputation is maintained for many years to come.

The four 28 metre high poles, with six lights on each, will give our players the opportunity to train on a top-quality oval with state of the art LED lighting for many years to come. The Club’s vision is to always strive to innovate and improve across all aspects of operations, both on and off the field. These new lights will give us tremendous flexibility in relation to the fixturing of matches for our men’s and women’s football teams.

Planning for the new lights started in 2018 as the old lights were no longer at the required levels for training, let alone night football. With the support of Knox City Council and Alan Tudge MP, the Club lodged a submission for Federal Government funding under the Australian Sports Commission’s Community Sport Infrastructure Program.

It was a great day for the Club when Alan Tudge announced the ASC’s approval of our application for $190,000 to fund the project. The successful application for further funding of $24,000 from AFL Victoria under the Facility Development Program ensured that the Club’s own contribution to the project was manageable, while still significant.

The Lights were officially switched on by Club great Kristan Wood, accompanied by three other former Club Presidents, at a ceremony on 29 August.

The Club would like to express out gratitude and appreciation to the following people and organisations for their significant contribution to the successful completion of this project.

The Eastern Football League has officially announced the 30-man SEN Team of the Year squads across each division. Final teams will be announced at the Chandler Medal on Wednesday, September 18.

Congratulations to the Boronia players who have been named in the initial squad:

The full squads across all divisions can be seen by clicking here. 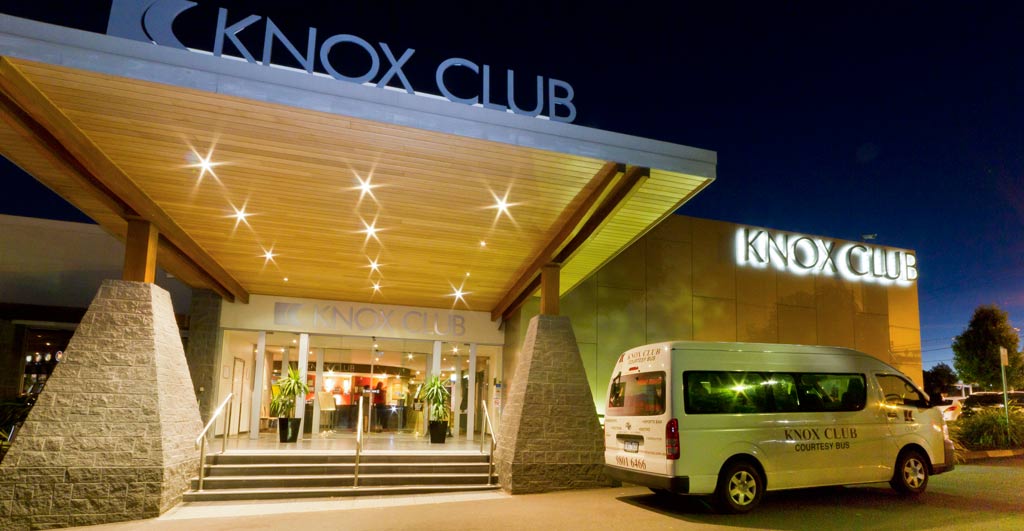 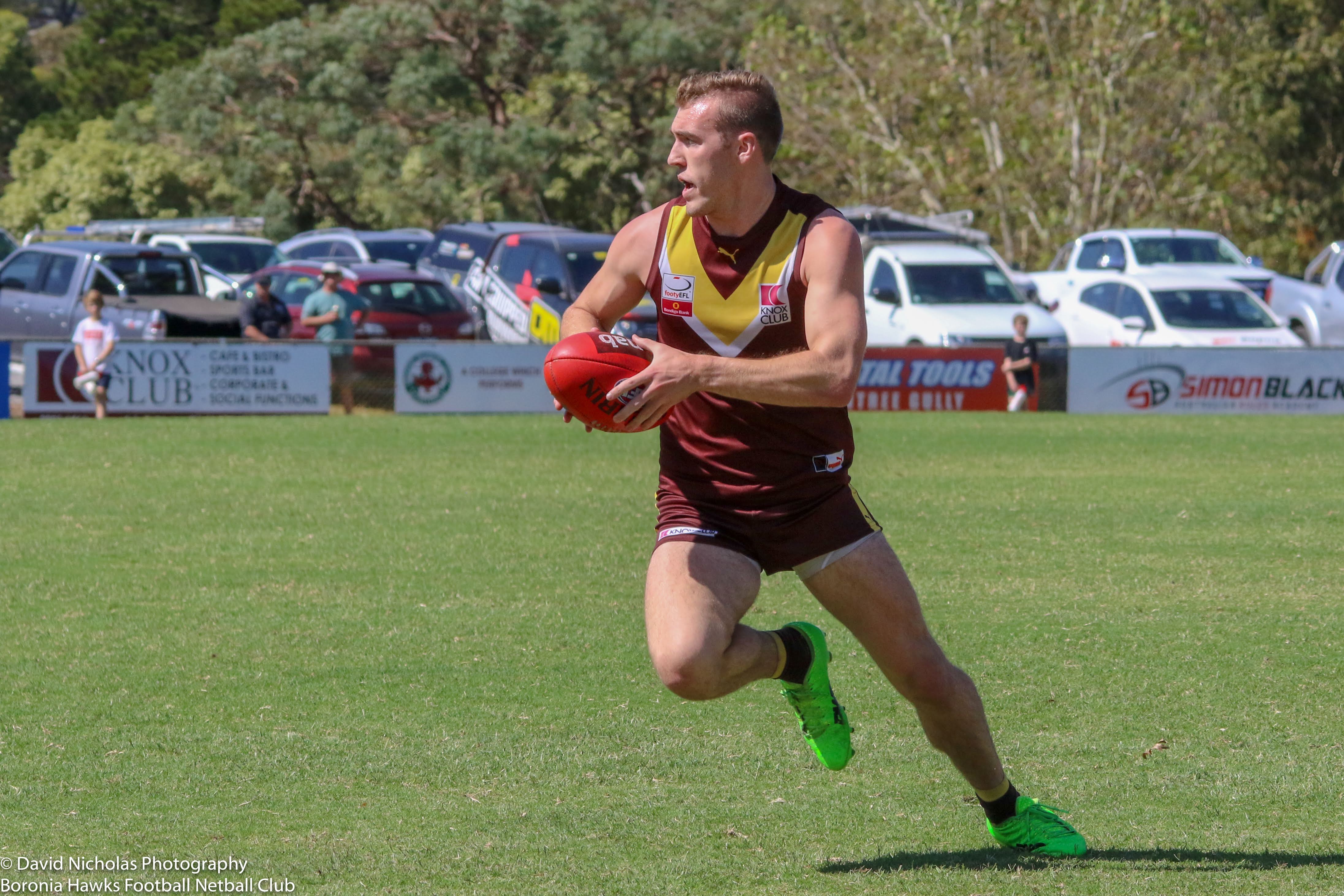 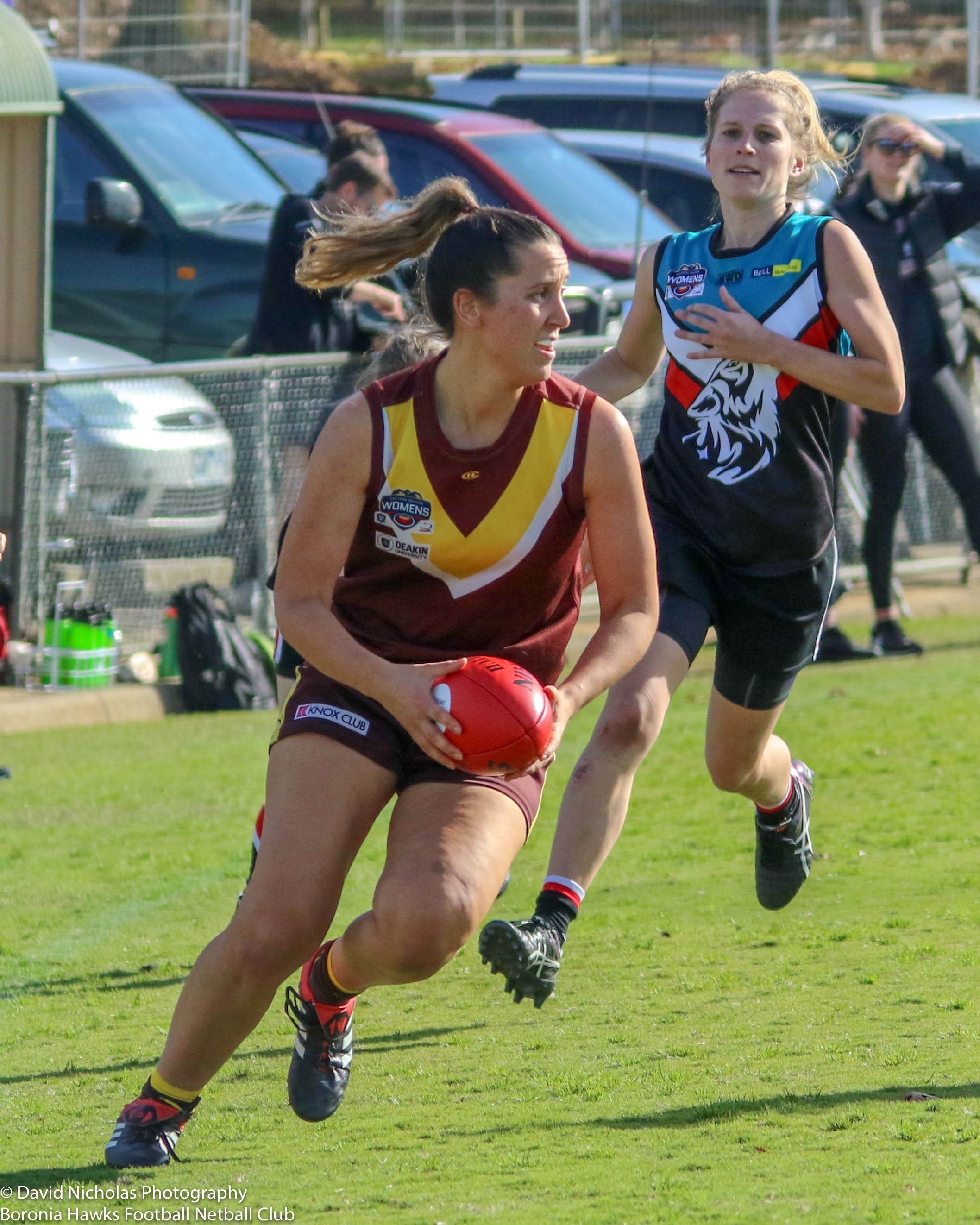 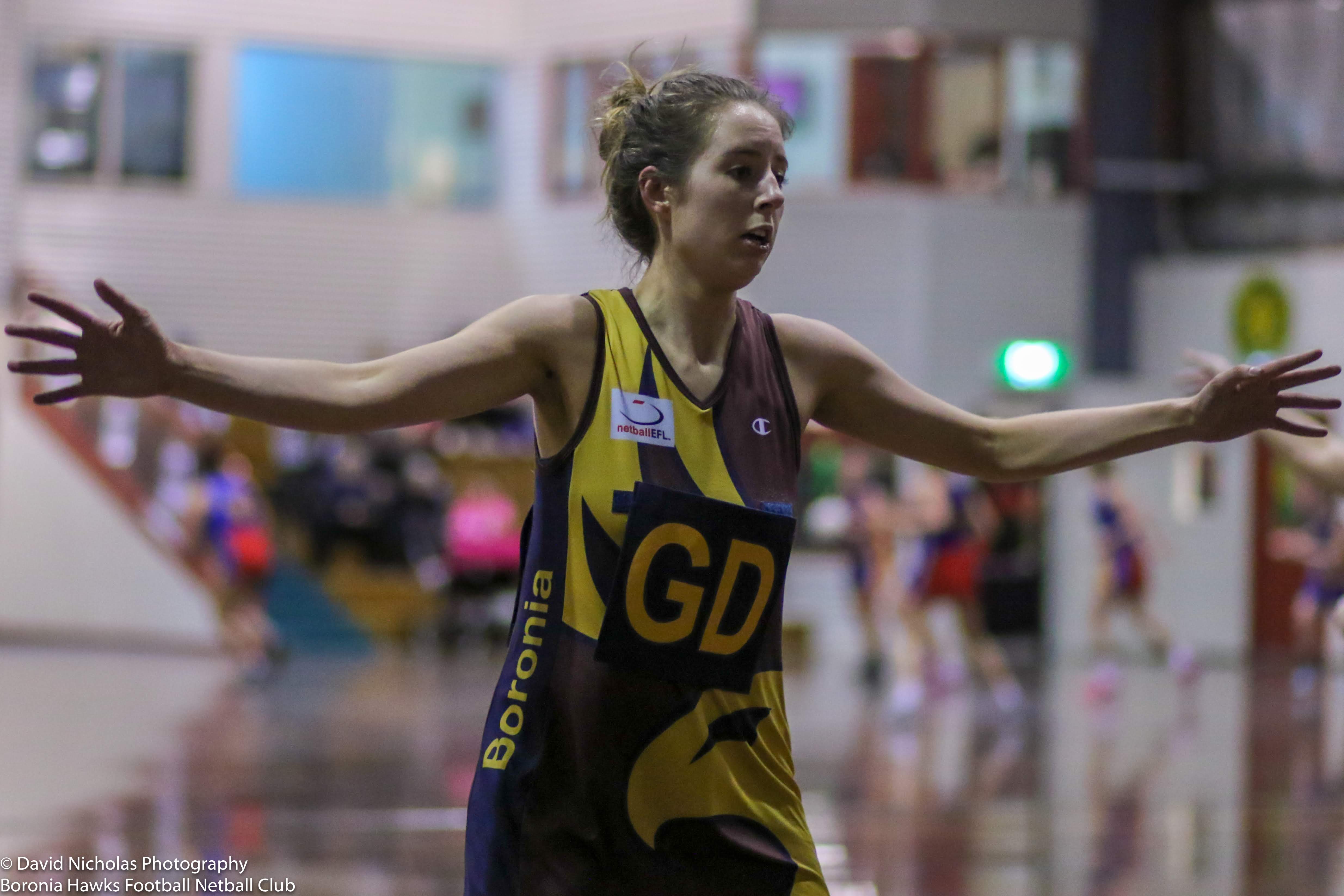 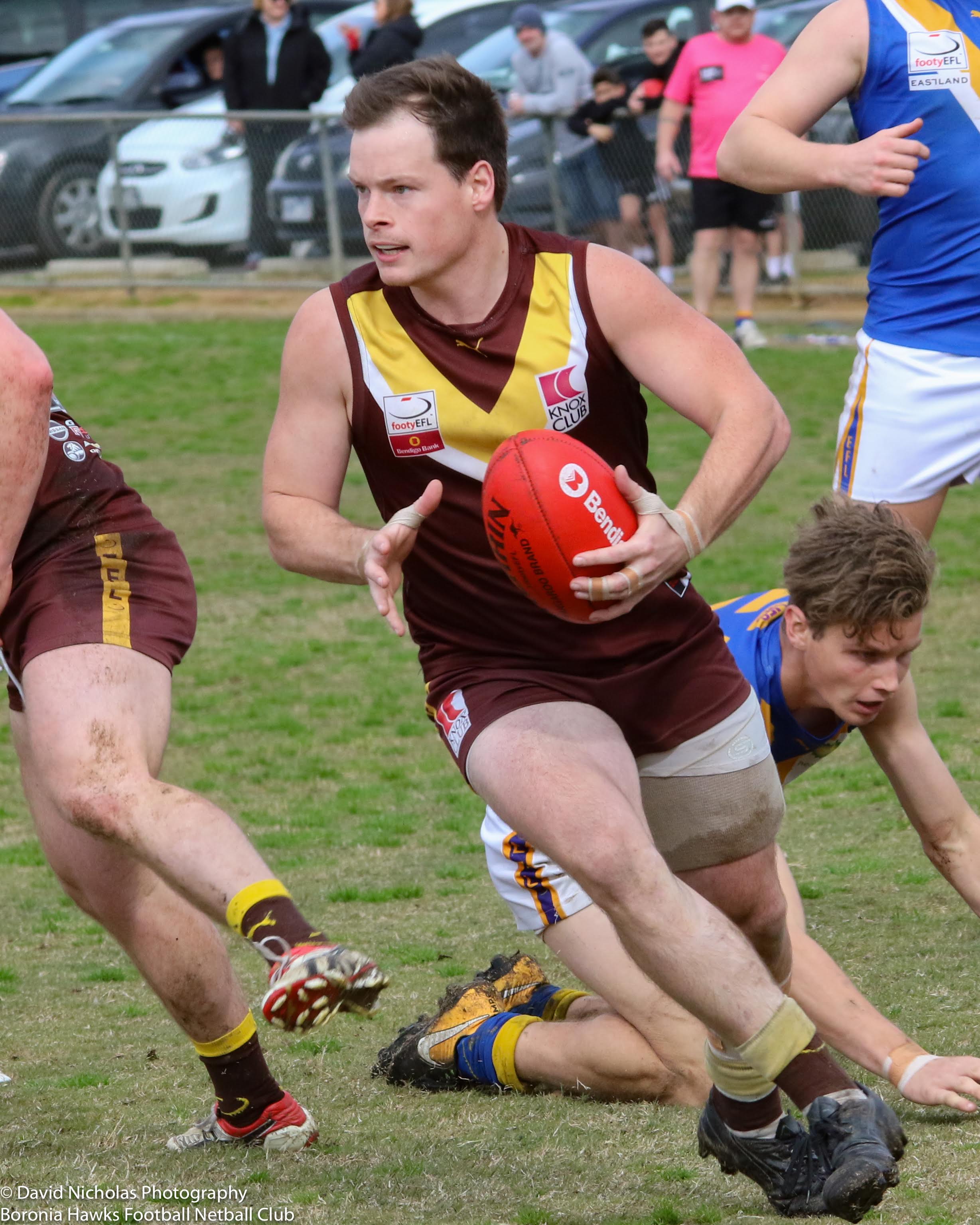 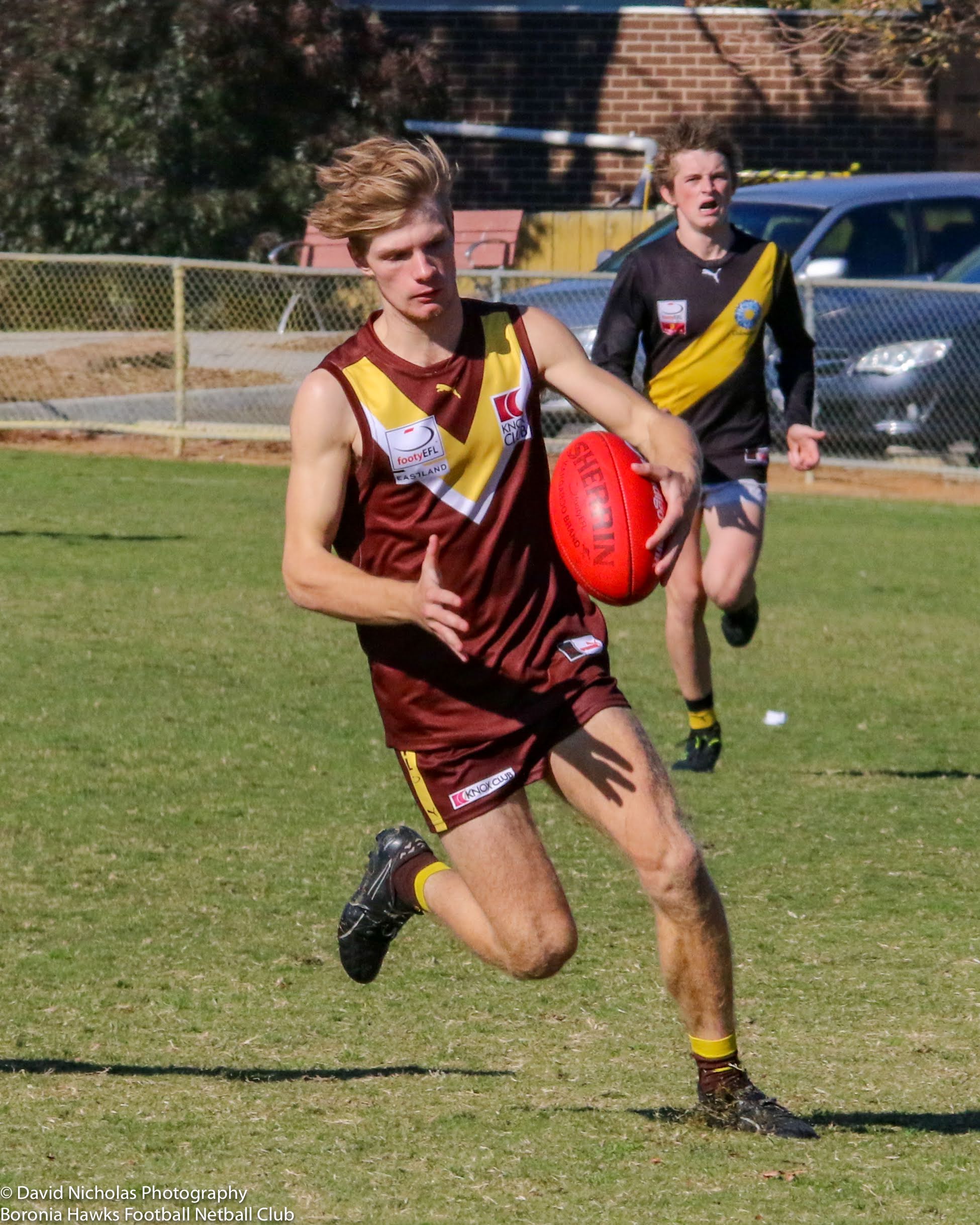 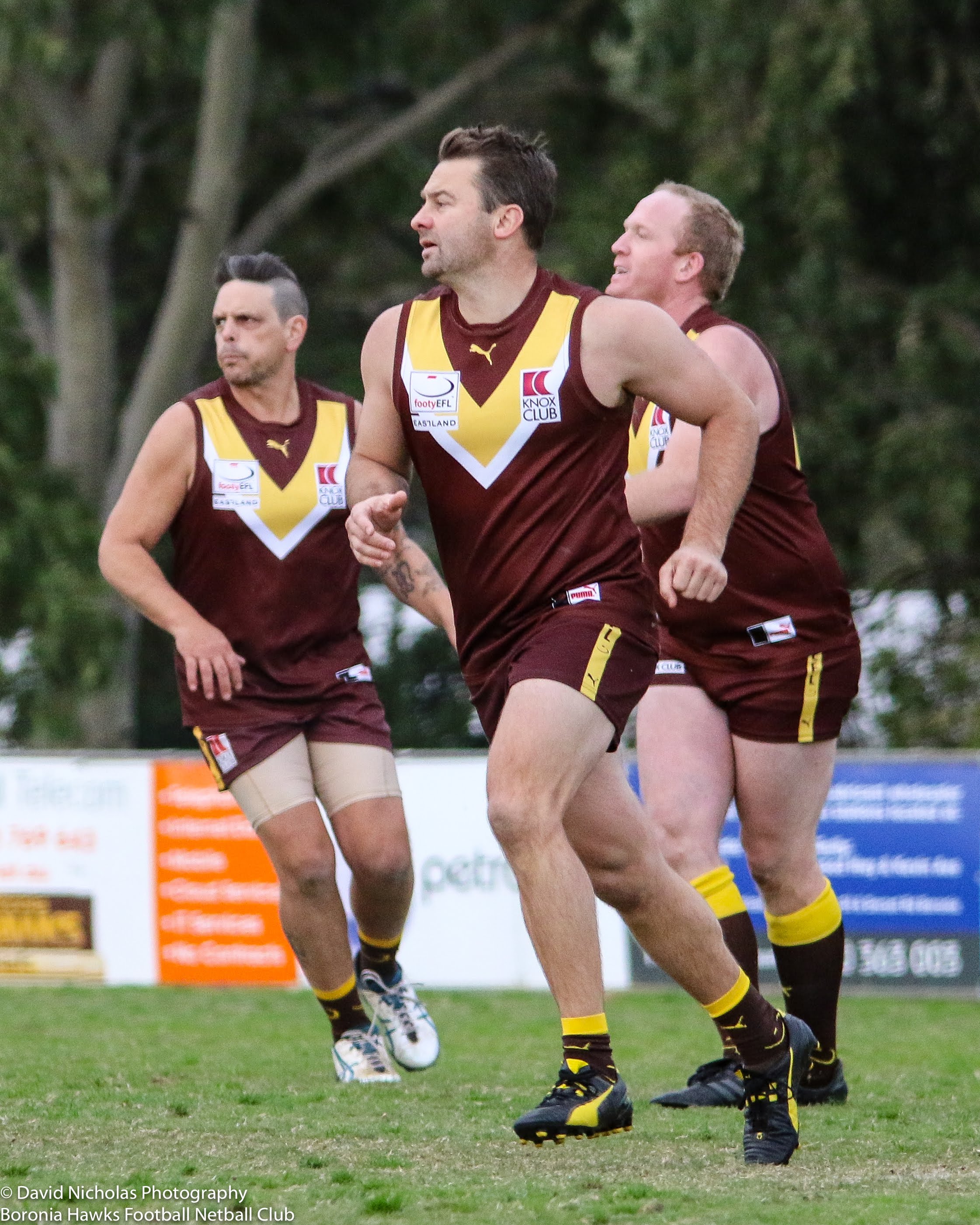 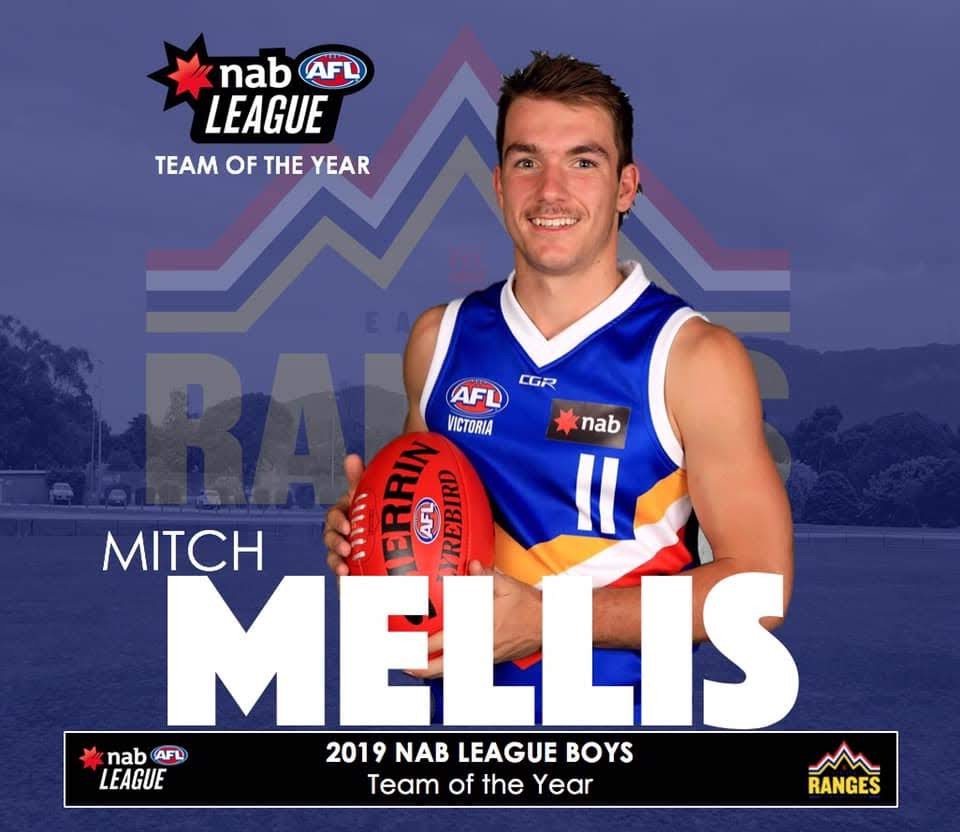 Congratulations to Boronia’s Mitch Mellis for his selection in the 2019 NAB League Boys Team of the Year and for his third place in the 2019 Morrish Medal for the League Best & Fairest.

This is an outstanding result that reflects Mitch’s great season built on his undoubted talent and dedication. 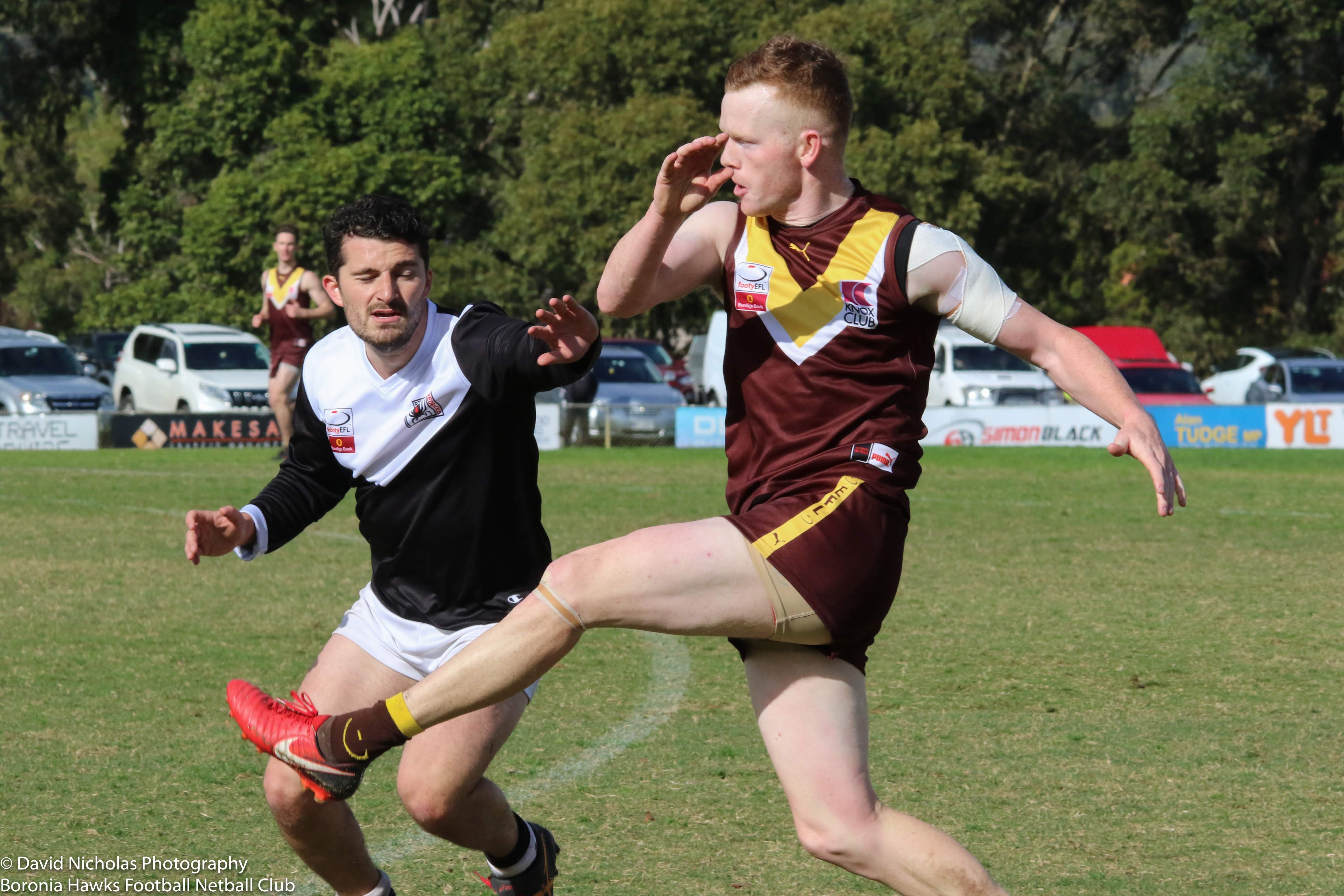 It’s a possibility.  Clark has recommitted to the Hawks for a further two years after signing a contract extension until the end of 2021.

He coached Wantirna South to a flag in 2014 and joined Boronia ahead of the 2018 season. A premiership this year would take Boronia up to EFL Division 1, where the Hawks would meet the Devils in 2020.

“Ultimately our goal is to be playing against them next year.”

Clark said it was a logical decision to extend his stay at Tormore Reserve.

“They’re a good club with a really young list and I’m super happy where they’re at and they’re comfortable where I’m at, too,” he said.

“I really enjoy working with the guys. It’s a fun place to be at the moment.”

Clark guided Boronia to a premiership in his first season but the Hawks were not promoted as part of the competition restructure.  Boronia will enter this year’s finals series on a 10-game winning streak if it defeats Ringwood on Saturday in a top-of-the-table clash.  It has already secured the double chance, but has flag rivals in Ringwood, Mitcham, Heathmont and Templestowe in an open premiership race.

Clark said he wanted to take Boronia to Division 1.

“We’re trying to make it a destination club and I think we’re doing a pretty good job of that at the moment,” he said.

“The players are hungry so my job is to obviously steer them in that direction. There’s no guarantee we can get there but we certainly think we’ve got a good formula to be competitive enough and be in the mix to get there.” 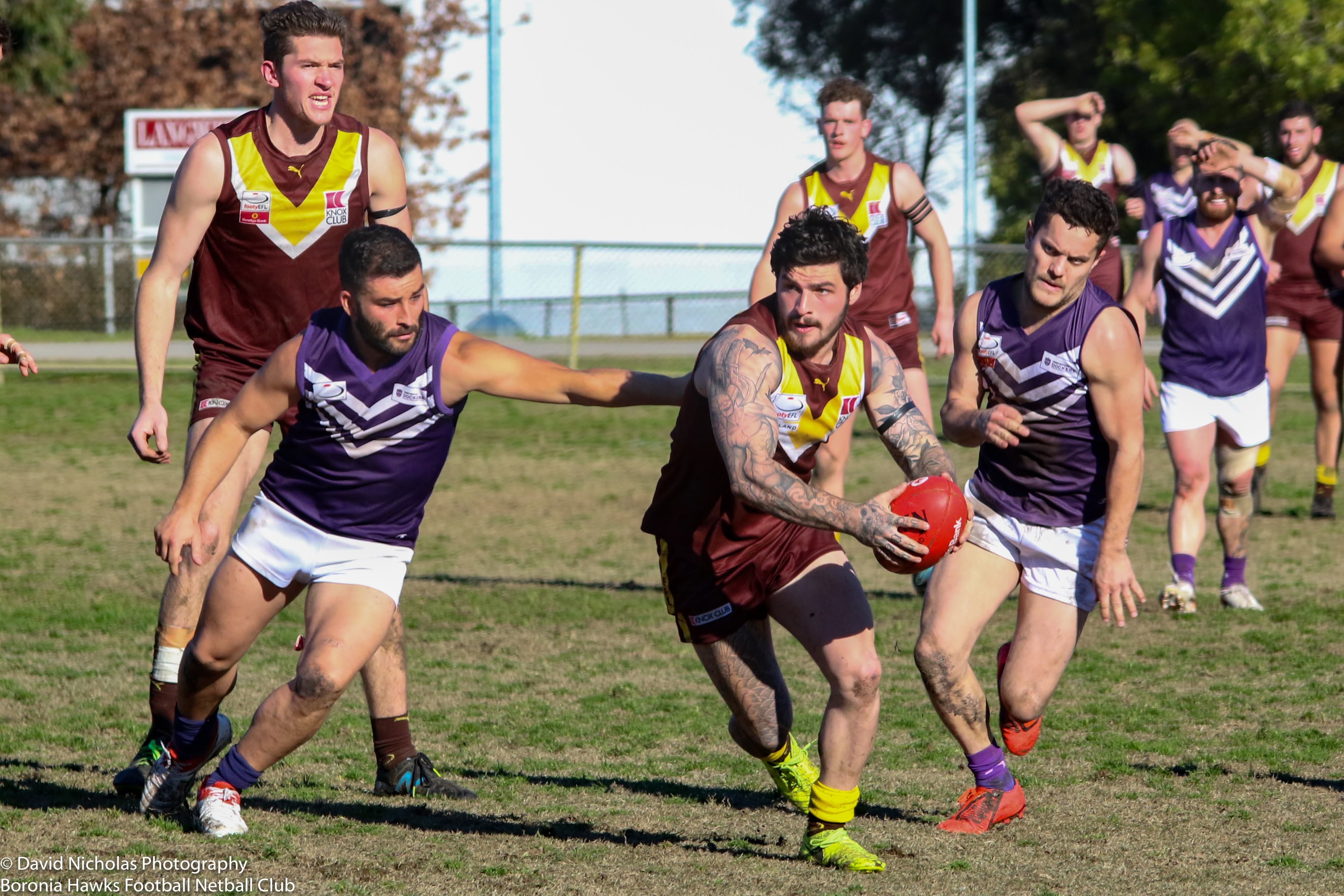 Clark said the Hawks would be at near full strength for a tilt at back-to-back flags.

“We’re very happy with who we’re putting out there,” he said.

“We’ve played a couple of guys, like Lachie Watson and Brayden Bowes, in the development team for the last four, five weeks.

“The hard thing — and the good thing — is we’ve got so many guys playing good footy in the seniors at the moment that some of these blokes are just finding it hard to get into the side.

See the article at 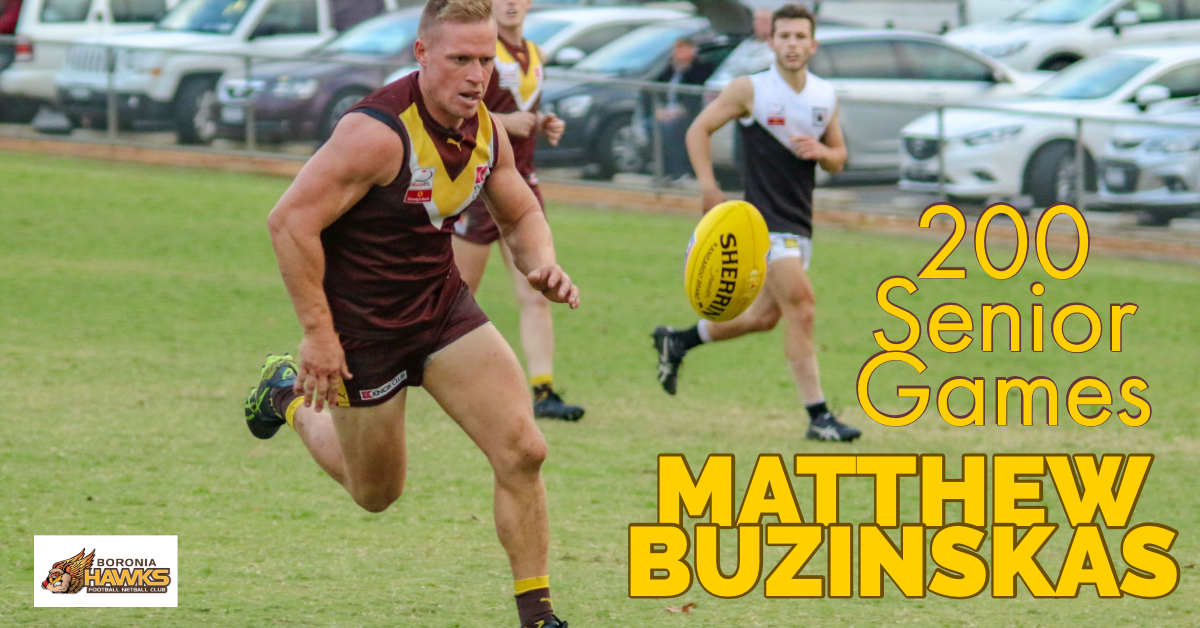 Please join us all in congratulating Matt Buzinskas on the occasion of this 200th Senior Game for Boronia Hawks in Round 17.

This is a massive achievement, with very few players reaching this milestone with the Hawks in recent years.  Even more remarkable is that Buzz has played at four other clubs during his career.

In fact, Buzz has racked up well over 350 games in total if we add on 89 junior games for Boronia; a junior season at North Ringwood; a senior premiership at Forrest in 2005, 17 games for Watsonia; and 17 games for Wantirna South!

Buzz has been a standout player for Boronia since his senior debut in 2006 as a seventeen year old, but with a rig and attitude well prepared for senior footy.  He has only played 2 games of Under 18’s footy and only 16 Reserves games so he has been a fixture in the senior team as an inside mid and crumbing forward.

Buzz’s goal sense has been a feature of his game, with 208 senior goals for the Hawka and a best of 7 in one game back in 2007.  There has been no greater sight in recent years than Buzz charging through the guts to kick a team-lifting goal then running back to the middle with a modest celebration as the Hawka faithful raise their voices, and cans,  to salute another Buzz special!

Buzz is a true champion of the Club.  He provides a great example for our young players and is still playing tremendous footy in 2019.  Congratulations to Buzz from everyone at Boronia Hawks.  We wish him, and his family, our very best wishes for his  milestone game and for many more to come.  We can’t wait to see him teaming up with Woody and Stifler in the Vets!