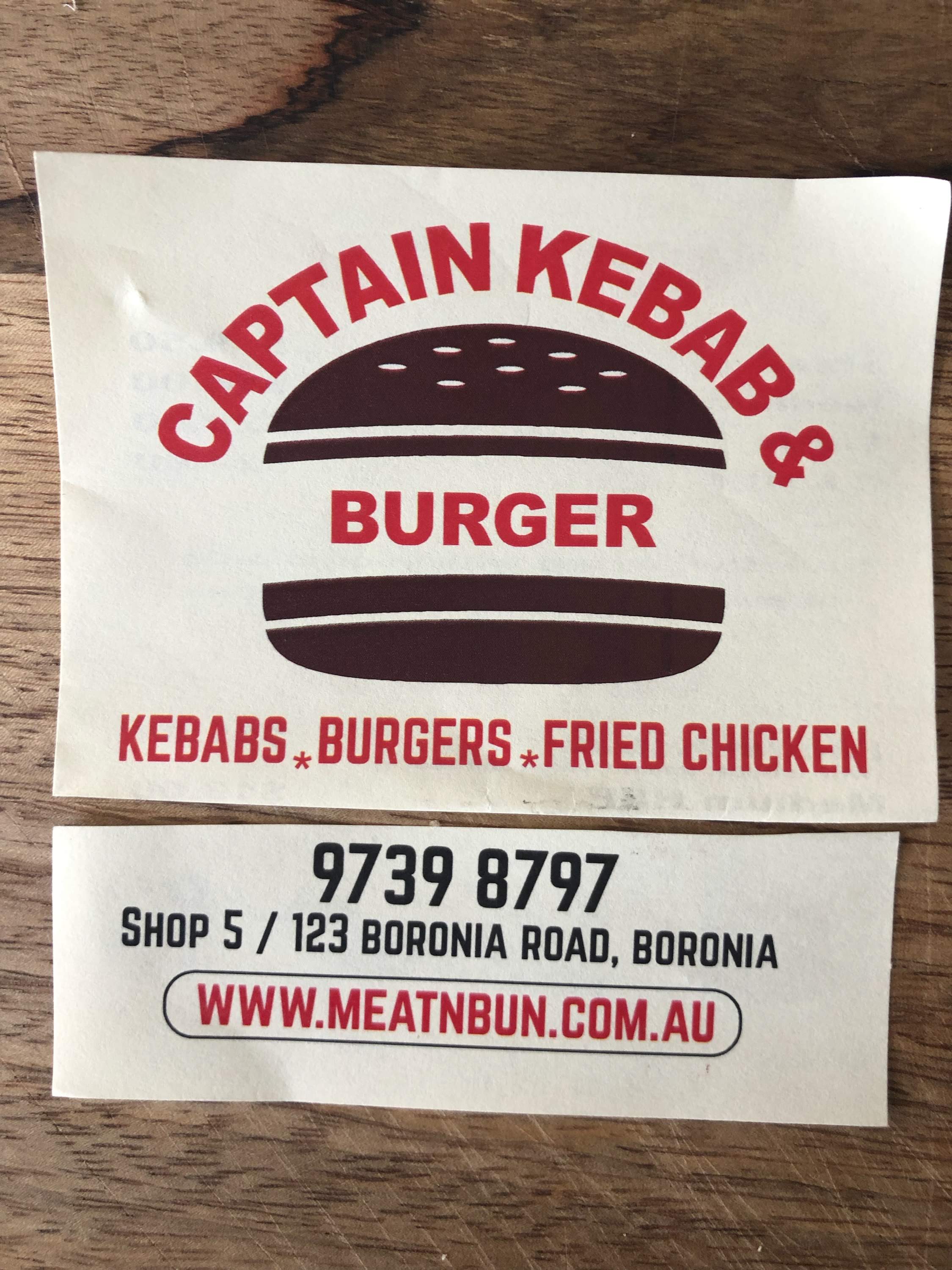 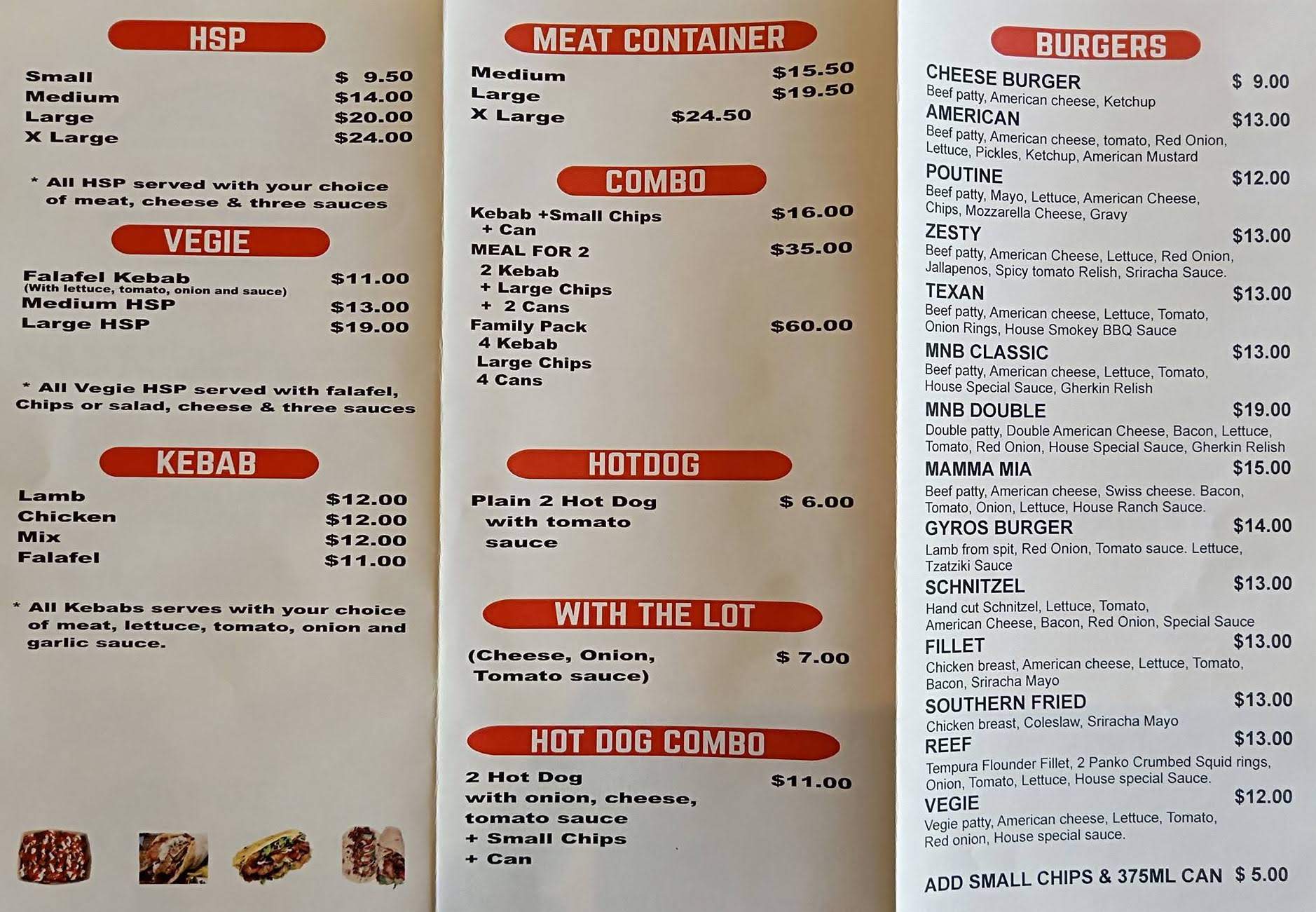 Go along to see the team at Captain Kebab and save 10% on your order when you present  your Boronia Hawks Membership Card! 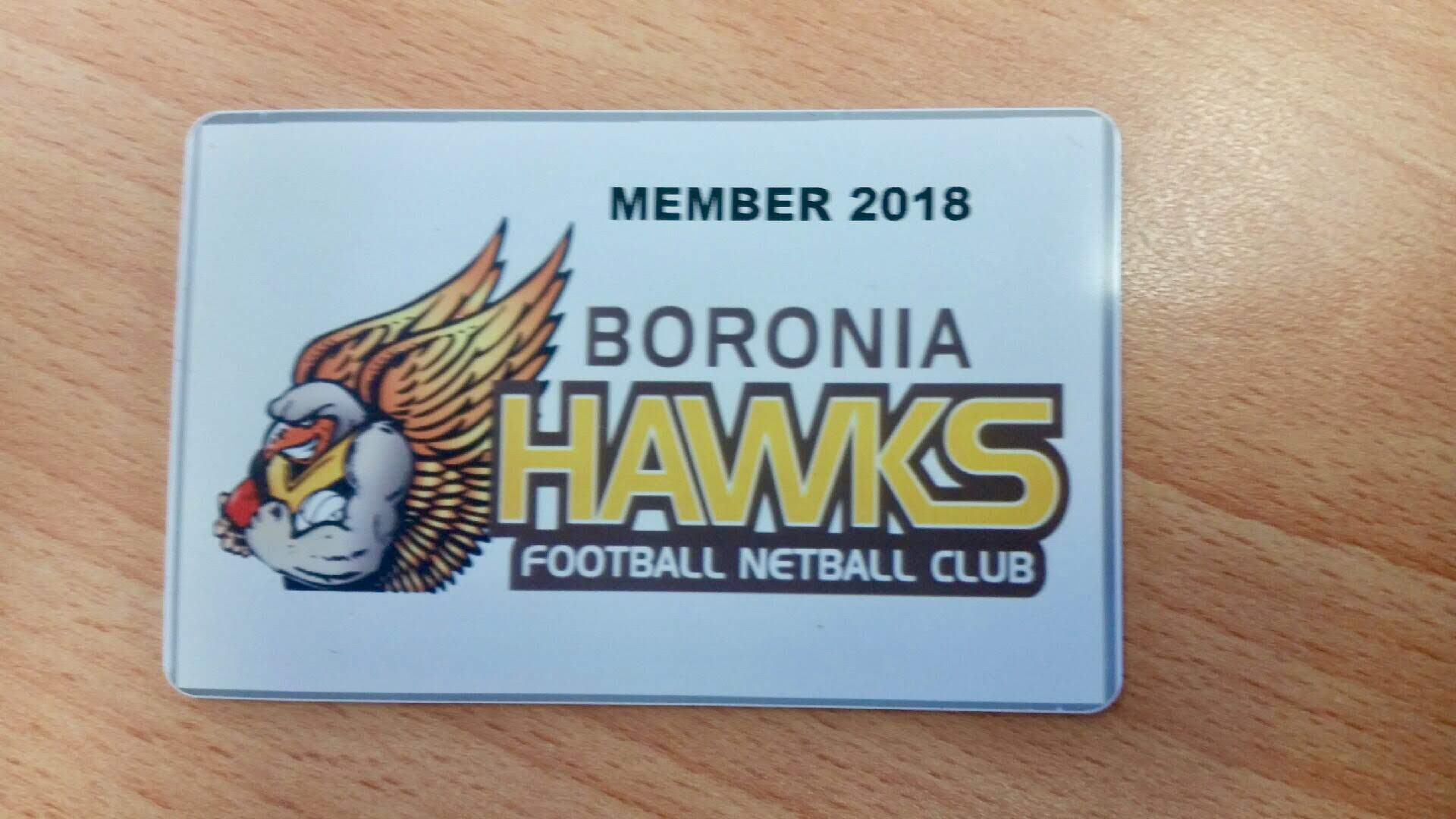 There will be more Community Partners bobbing around the Boronia shopping centre in the near future so please support these businesses that are proudly displaying our sticker in their window! 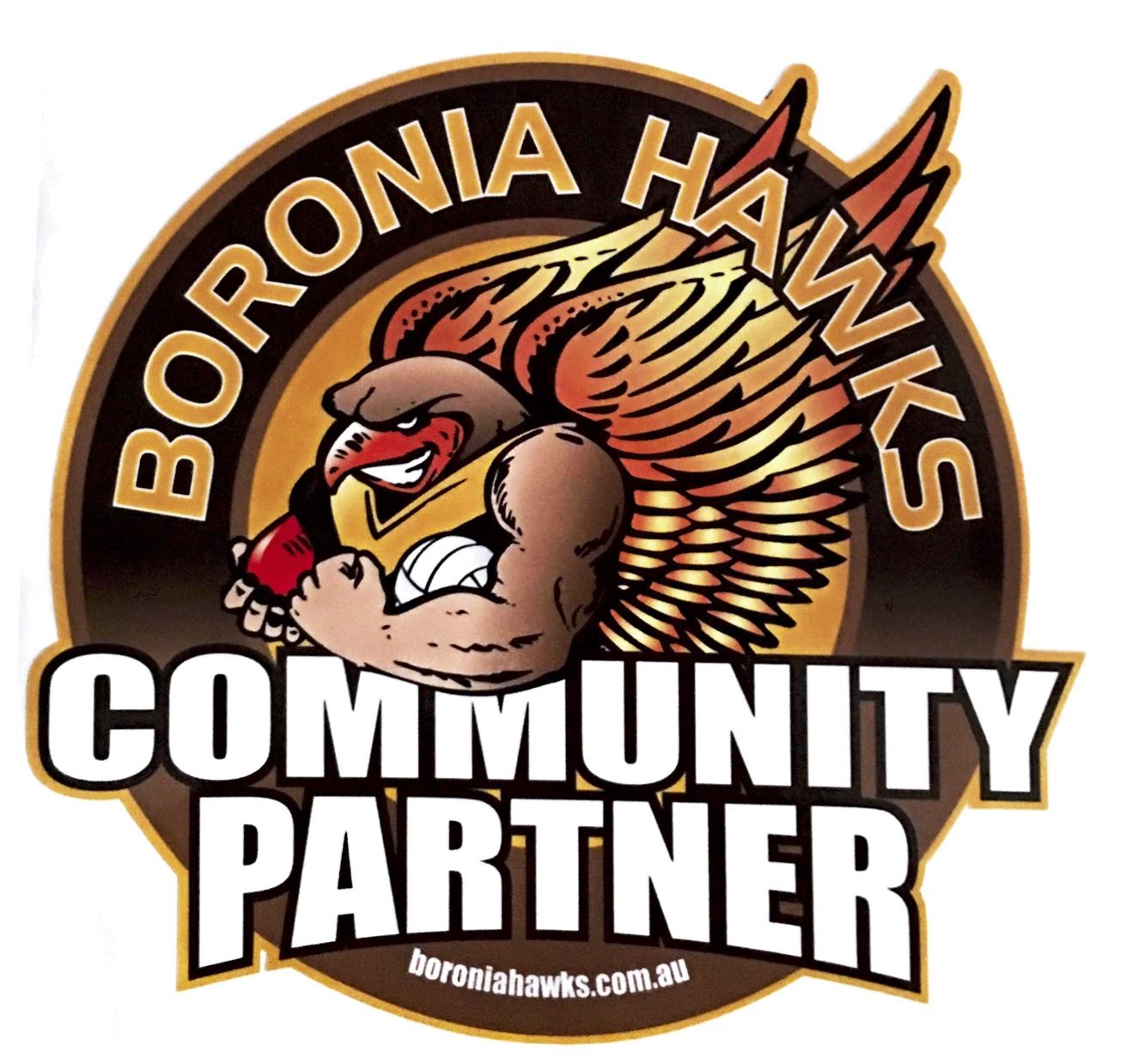 Any enquiries for Community Partnership or Sponsorship opportunities with Boronia Hawks may be directed to Greg Hannon on 0438 616 130? or Samantha Dunkinson on 0419 502 633?

Boronia Hawks is on the lookout for some more players to finalise our netball teams in 2019!  If you are looking for a game on Friday nights, or know someone who may be interested, please contact Sherridan Leeson right away! 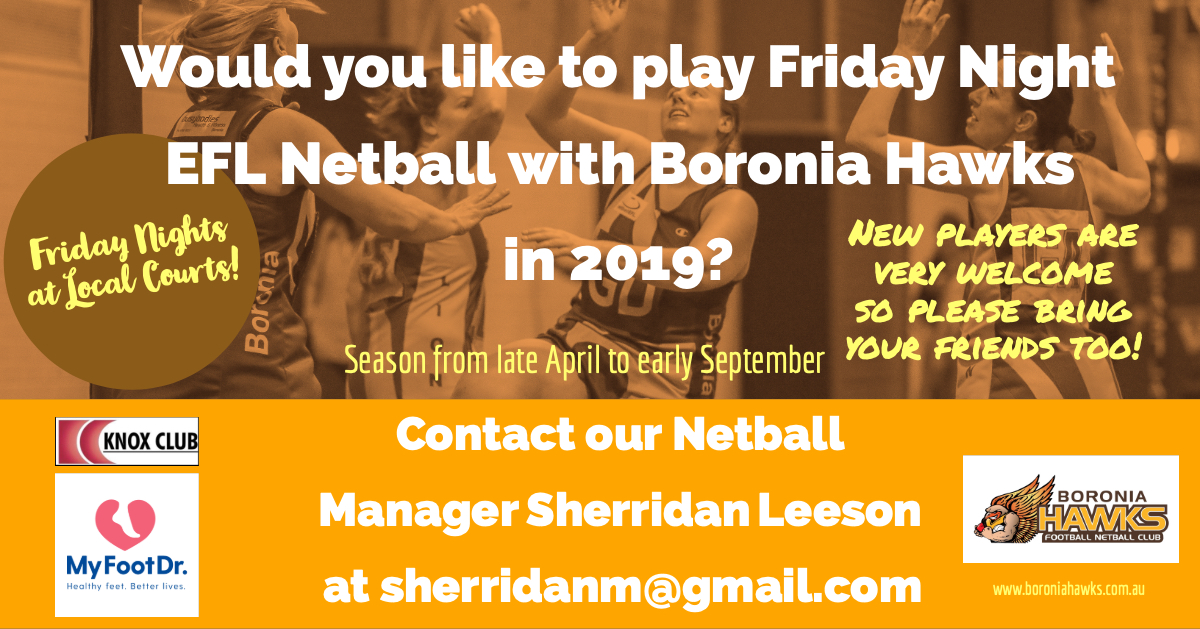 Boronia Hawks are very proud to be the official 2019 Player Sponsor for Mitch Mellis at Eastern Ranges for the upcoming TAC Cup season.

Mitch won the Eastern Ranges Penington Medal for Best and Fairest in 2018 as a bottom-age player and we are very excited to support him again this year.

The Hawks are committed to supporting our elite young players as they move through our development pathway and up to higher levels of football. Very best of luck for 2019 Mitch!

Mitch passed on this message of thanks to the Boronia Hawk’s volunteers, members and supporters:

“I would just like to thank all of you for the constant support you have given me with my footy and I am really proud and lucky to be associated with such a great club!
Cheers, Mitch” 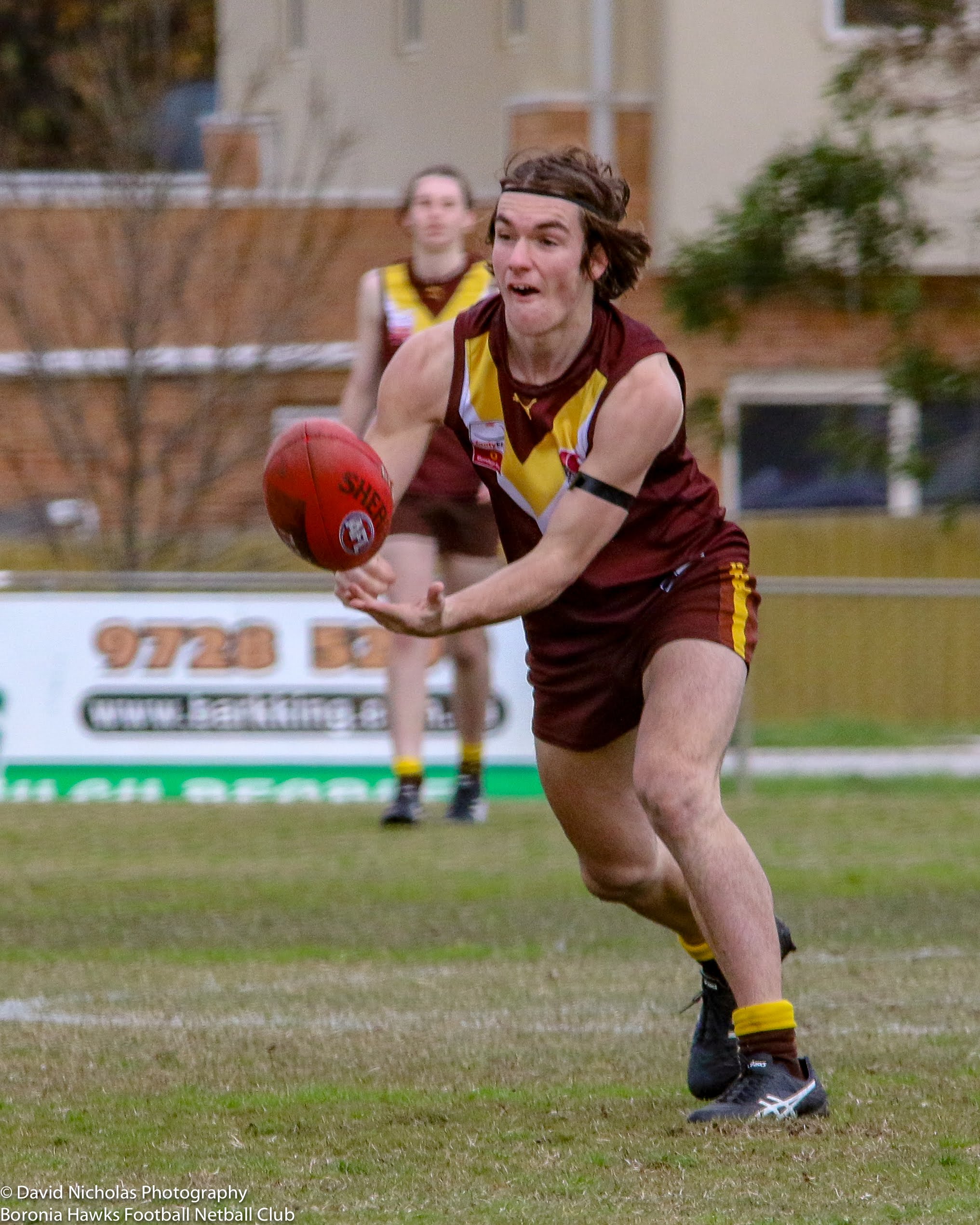 Many thanks to our Club members who who attended last Sunday’s EFL Development Day at Deakin University.  In particular, we would like to express our thanks, and admiration, to our very own Elle Dow, the AFL Victoria Development Manager for Eastern Region, who organised the event.

Karen Little, our Director of Community & Inclusion  was very impressed with the day.  Here are some of her thoughts. “The EFL Club Development morning was a great opportunity to network and learn. With three parallel sessions there were a diverse range of speakers and topics including finance, conflict resolution, applying for grants and how to manage Team App. For me, the highlight of the day was a presentation by Jackson Taylor from AFL Victoria on engaging diversity in our community. Goy Lok spoke about the barriers and challenges of joining a local footy club after arriving in Australia as a refugee and his successes to date. A reminder that a football club is so much more than the game of football. Congratulations to Elle Dow and team for organising such a great program”.

It was a great sign for Boronia Hawks that four of our women’s footballers attended this afternoon’s EFL Female Development Day, also organised by Elle.  Here are Candyce Wright’s thoughts on the success of the day. “This afternoon showed me the importance of having powerful and inspiring women as a part of a sporting community!  It doesn’t matter your background or skill; it’s the heart and soft touches that we bring to the Club that will encourage people from different cultures, diversity and limitations to come and feel the support we all feel, on and off the field”.  Terrific words Candyce!  Thank you to Elle, Candyce, Karen, Dee and Kat for attending today.

Boronia Hawks are very pleased to announce our new partnership with Awesome Conveyancing!

Awesome Conveyancing don’t only help with the sale and purchase of property we can assist you in many ways:

Many thanks to Krystal O’Toole and the team for the support of our female programs in 2019! 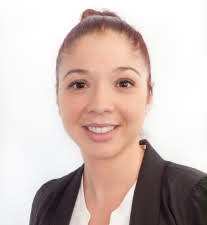 Krystal has worked in the legal industry for the last 11 years and has specialised in conveyancing for the last 7 years.

Krystal has a high attention to detail and enjoys assisting first home buyers through the process of buying their first home, giving them the time and attention they need to feel comfortable with the process.

Outside of work, Krystal enjoys spending time with her family, reading trashy vampire novels and has a passion for fitness and exercise.

Krystal is also a member of the Australian Institute of Conveyancers.

Contact Krystal today to see how she can help you!

Boronia coach Matt Clark hopes to see little of young premiership star Harvey Chinn this season.  Chinn’s unavailability from the Hawks would mean he is playing in the VFL, rising from the third tier of the Eastern Football League to secure a spot with Port Melbourne for 2019.

The left-footed midfielder was in and out of Eastern Ranges’ team last year, played under-19s at Boronia at the start of the season and ultimately played an important role in the Hawks’ senior grand final boilover over Ringwood.

A mention in the best players was testament to his development at Tormore Reserve. Clark rated Chinn’s work rate among the best he had seen.

“Every time he came back (from Ranges) he played really good footy so it was in the second half of the year that we gave him a couple of opportunities and he grabbed them with both hands,” Clark said.

“Harvey works as hard as anyone I’ve seen and ended up being a rock-solid premiership player and one of our best players on the day.

“He’s one of those kids that just keeps working as hard as he can all the time.”

Clark said Chinn’s skills and decision-making had helped him progress to a state league opportunity.

“He’s not tall in stature but what he does, he tackles well, keeps his eye on the footy all the time so he is brave around the footy but he also has the ability to read it really well,” he said.

“I think what every coach likes about Harvey is that he will play a role for you … he’s keen for feedback all the time, he takes it on board and he keeps seeking out feedback so he can improve constantly.”

Port Melbourne coach Gary Ayres said Chinn’s willingness to grow his game over the pre-season had elevated him above other players vying for a spot on the club’s list.

He noted a shift in pre-season training to Salesian College in Chadstone due to ground refurbishments at Port Melbourne had made it easier for Chinn and other eastern suburbs hopefuls to train with the club.

“Harvey has been fairly consistent in the way he’s trained … he’s been able to impress on us his gut running and two-way running,” Ayres said.

“Once he gets the ball he uses the ball reasonably well and makes reasonably good decisions and he’s just had a really solid and consistent pre-season and we rewarded that with a spot on the list.”

Ayres said Chinn would be in line for VFL games this year.

“I don’t think anyone has any right to say, ‘a player can’t play’ and you don’t want to place any restrictions on how good they can or can’t be,” he said.

“Certainly if anyone understands my philosophy as a coach, it is about giving players an opportunity … we have 45 on our list and last year we played 43 from memory.

“You do know you’re going to be given an opportunity if your form is OK.” 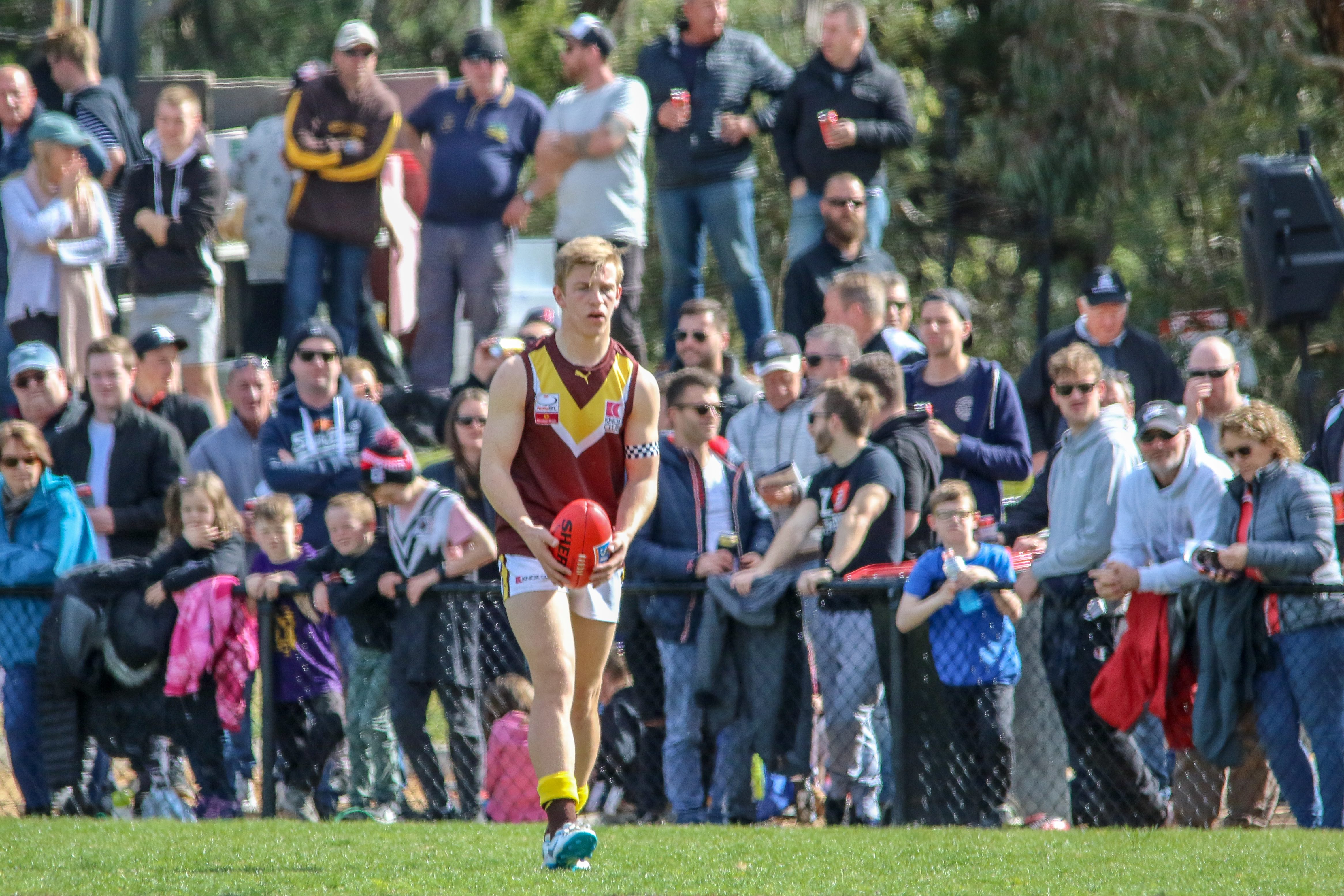 Harvey Chinn from Boronia Hawks has recently been selected for Port Melbourne Football Club’s VFL List for the 2019 season.  This is a great reward for Harvey as it recognises the amount of hard work and dedication that he has put in to his football over the past seven years since he joined Boronia as a junior player.  It also demonstrates the ability of Boronia Hawks to nurture and develop young talent in a high performance environment with a great club culture. 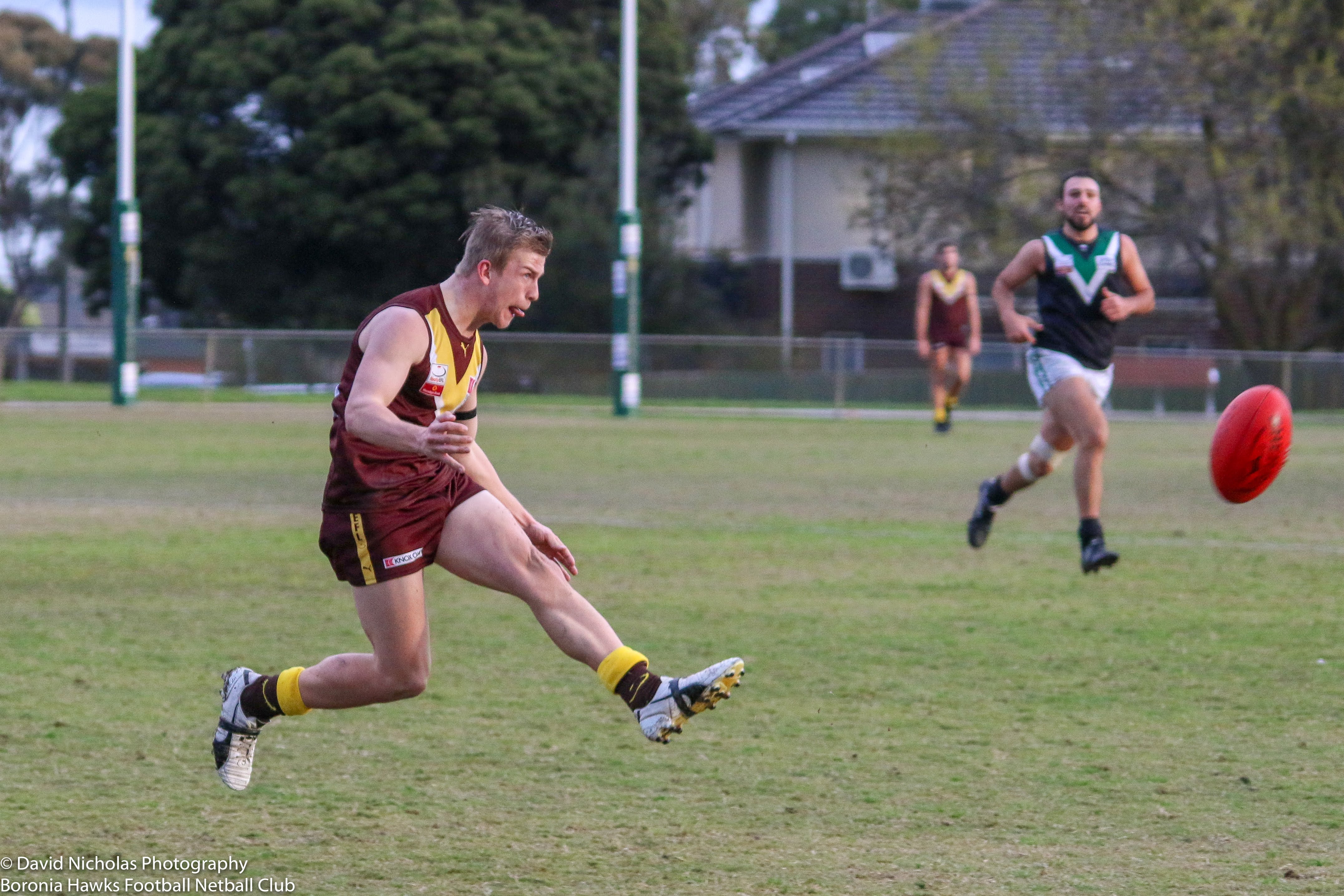 Harvey was identified early in his career as a standout player and the Hawks worked with Harvey, and father Stu, to fast track his growth as a footballer through the under age ranks.

Harvey moved up to the Club’s Hawk Squad Development Program in 2016, under the guidance of leading youth coach Craig McKenzie.  Harvey played Under 19’s as a 16 year old that year, and quickly showed his talent, strength and maturity.   Selection in the Hawk’s senior side soon followed in 2017 although he spent most of 2017 and 2018 with Eastern Ranges in the TAC Cup. 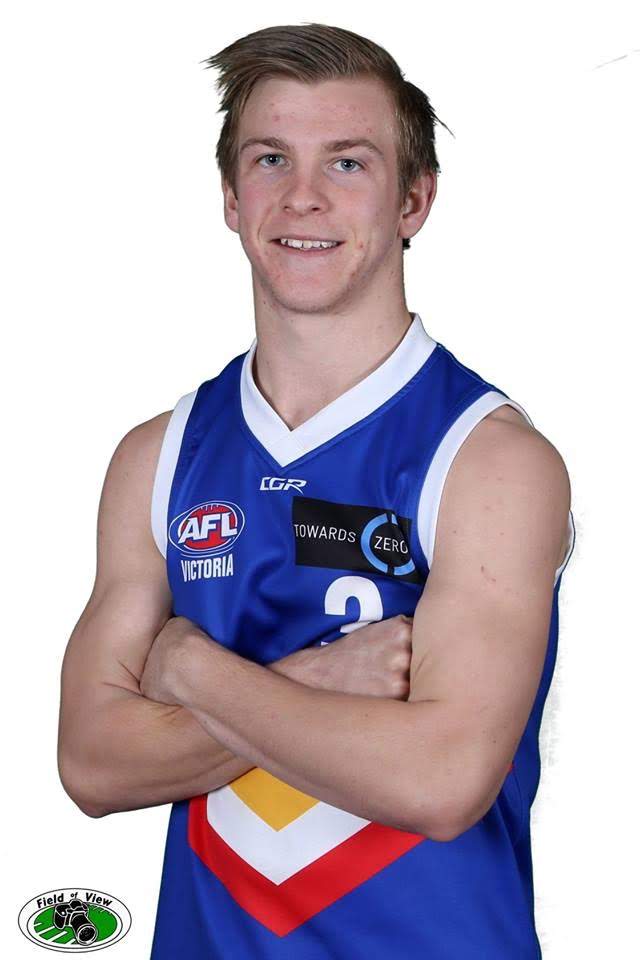 Together with current Eastern Ranges Best and Fairest winner, Mitch Mellis, Harvey is a great example of how Boronia can develop young talent and give them a great opportunity to go through to elite football.  Our outstanding coaching panel and fantastic facilities at Tormore Reserve, will bring out the best in young footballers. 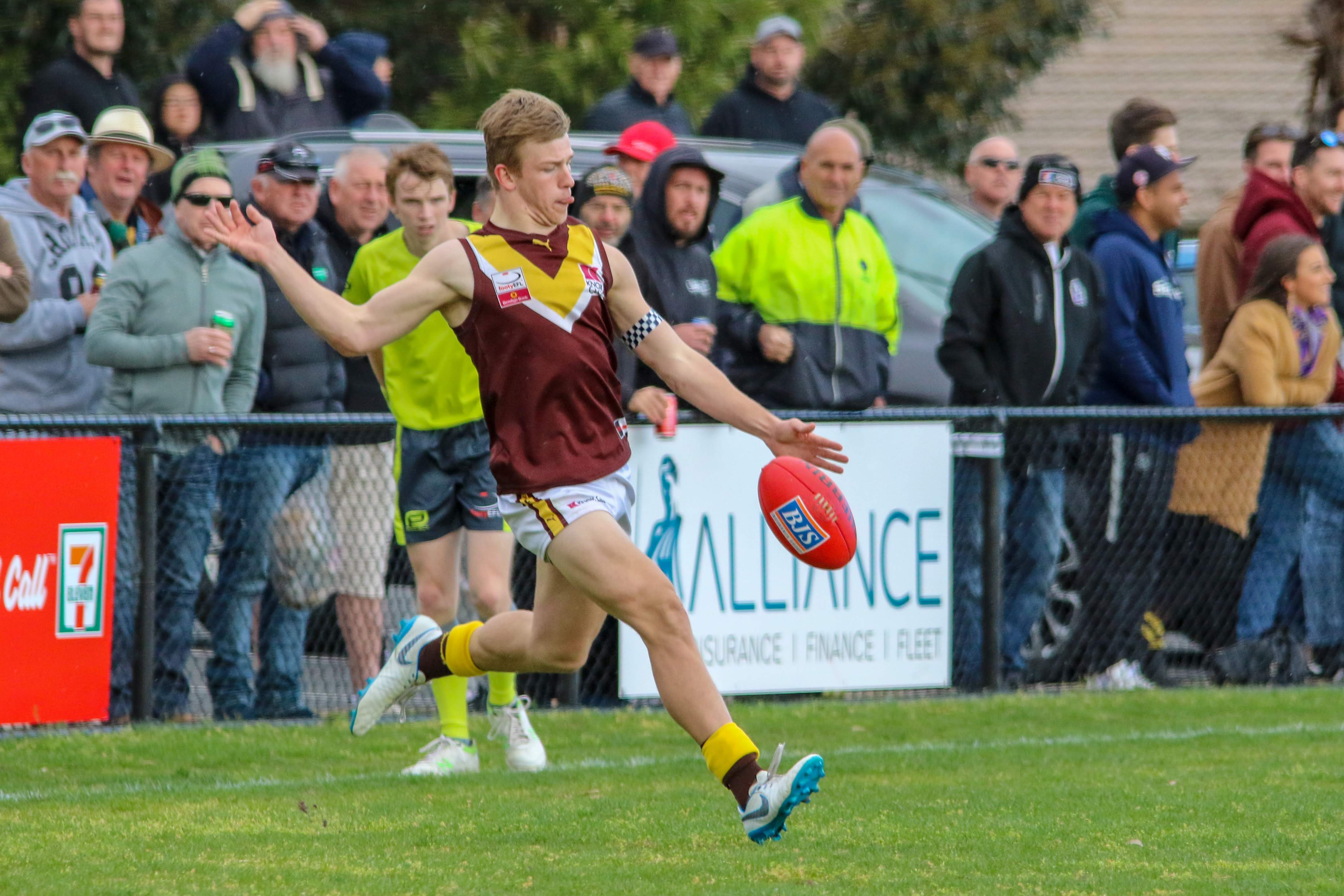 All enquiries from players interested in joining our football program are very welcome. 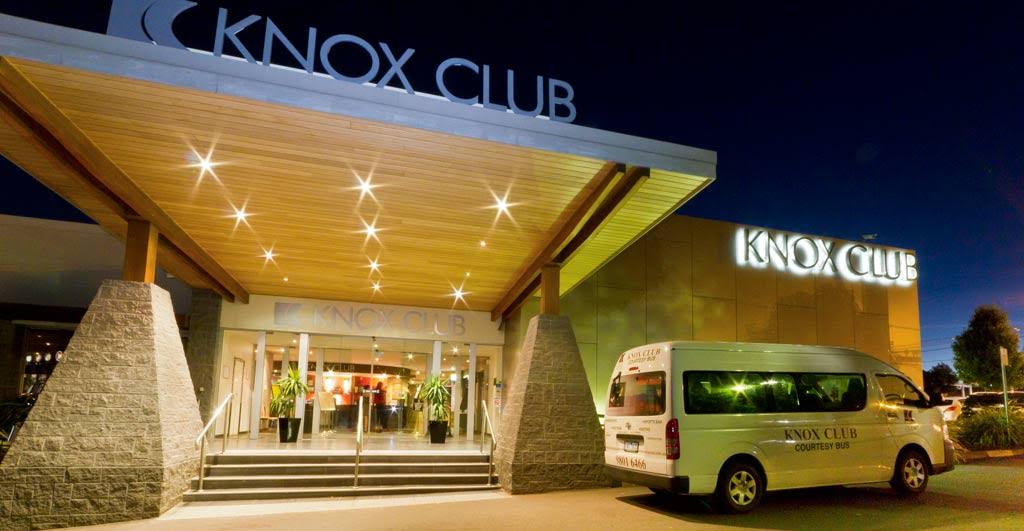 I write to update you all on a numbers of items.
Firstly, I’d like to officially welcome Wayne Preston onto the Senior Committee of the Club.  Wayne has supported the club over a number of years and has a wealth of experience, being involved in community based organisations such as athletics, tennis and netball clubs.  Wayne will assist in a number of areas but developing relationships and managing our ever expanding sponsorship portfolio will be the area in which he will be prominently involved.
Secondly, I am also very pleased to welcome Kathleen McMahon who has joined us as Senior Secretary.  Kathleen was previously a member of our gun Premier Division netball team, winning the premiership in 2017.  Now she is turning her mind to our successful Women’s football team and we look forward to Kath combining with sister Bec in 2019.
Local football / netball  clubs survive due to the dedication of our volunteers.  Our Club is most fortunate to have so many people that are prepared to do their bit.  Already committed for 2019 are:
All of these volunteer roles enable us to run in an effective manner.  Gratitude goes a long way, so never be shy to thank one of our volunteers when you see them plying their trade at the Club!
If everyone involved does their little bit, we avoid the too few getting burnt out which has occurred in the past.
Our Club is in a great position: we have an exciting playing list and our off field affairs are solid.  My role as Senior President is to ensure we don’t take our eyes off the ball and look for every available opportunity to promote our Club in a positive manner and to build relationships with key stakeholders to continually improve the facility of the Boronia Hawks Football Netball Club.
This year will see the installation of state of the art lighting.  We are doing our best to fast track the installation, but we are very much in the hands of the Knox City Council and their contractors.  I hope to announce with our Chairman, Scott Nicholas, other exciting new initiatives in the year ahead.
This season we have to build on the success of 2018.  Some may argue we are on a hiding to nothing as how could we possibly top 2018?  The answer is really simple.  Too often I’ve seen clubs reach great heights and then fall apart very quickly.  My job is to keep us focused, keep us stable,  work harder then ever before and strive to make our Club the most respected Club in the EFL!
Go Hawka!
Greg “Flash” Hannon
Senior President
Boronia Hawks

It’s time to start registering for AFL Auskick at the Boronia Auskick Centre!

5:00pm Friday nights from April to August at Tormore Reserve.

Heaps of fun for boys and girls aged from 5 to 12 who want to try out what they see on TV! 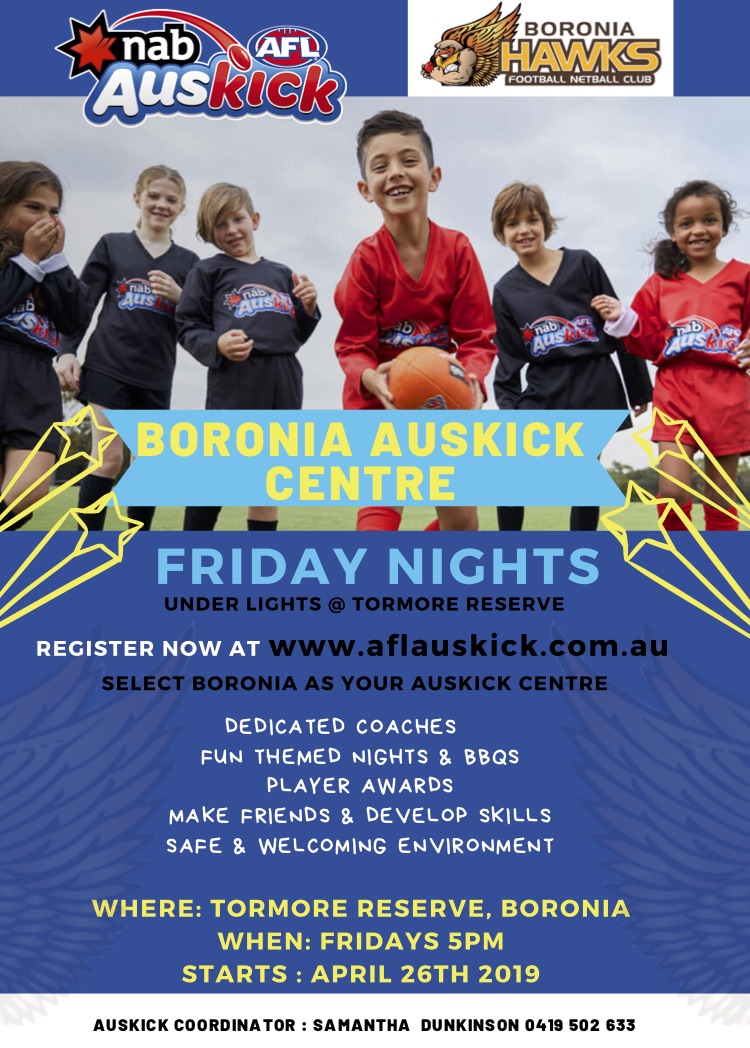 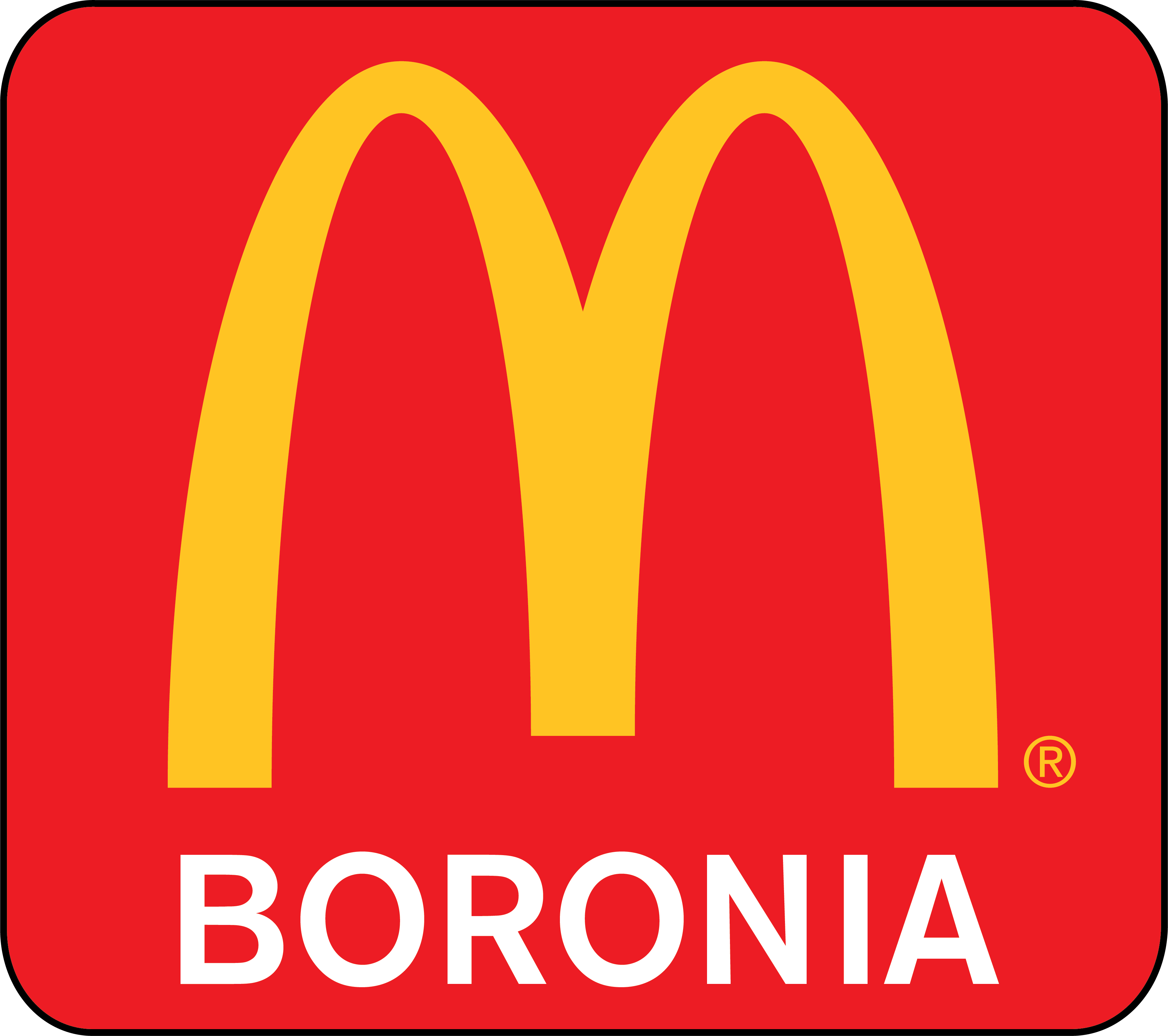 Our community partners are integral to the successful running of the Boronia Hawks Football Netball Club and we thank each and every sponsor for their generous contributions and ongoing support of our club.  We ask all members of the Hawka community to support our partners, whether it is through appreciation, awareness or better yet engaging in the services provided by them.

Any enquiries in respect of partnership opportunities with Boronia Hawks may be directed to our Senior President, Greg Hannon, on 0438 616 130.